About the Author: Donaldson was born in Taber, Alberta, and at a young age, moved to Woodstock, New Brunswick where his mother’s Irish family had lived for generations. His published work includes a short story collection titled Paradise Siding (1984) and two novels, MACLEAN and The Case About Owen Williams. He currently lives in Fredericton, NB.

Website: Donaldson doesn’t have a website, but a page exists for him at the New Brunswick Literary Encyclopedia. His Goodreads page is inactive. 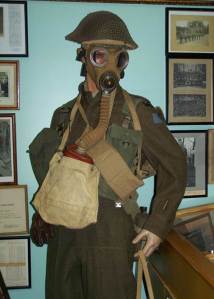 Cover (3/5): My first concern with the cover when I looked at it was, “Is the helmet authentic?” In other words, Did Canadian soldiers who served in the First World War wear this type of helmet? I googled helmet, Canada, First World War, soldier and found the Canada at War site. From what I can see, the helmet is genuine, but I’m unsure of the strap. This helmet—the Brodie—was patented in 1915 by John L. Brodie of London, and had an advantage over other helmets because it was a single, thick sheet of steel. It’s design resembled the medieval infantry kettle hat. It was issued in 1916 to Canadian troops.

Overall, the cover is plain. After reading the story, the cover seems fitting.

Title (3/5): I assume by the simple name—MACLEAN—that the story is about a single person. It doesn’t provide a glimpse into what situation this character might find themselves in. Putting the title and helmet together indicates it might have something to do with the military, but we are given no further information. Perhaps a more suitable title would be: The Awful Gift of Memories, or Memories That Live and Die.

Back Cover Blurb (4/5): Twenty-five years after the Great War, John Maclean is still struggling to carve out a meaningful existence in his small New Brunswick hometown.

One late summer day he embarks on a seemingly prosaic search for a little money, a little booze, and a birthday gift for his mother. But he’s haunted by memories—of war, of his cruel father, of opportunities wasted and last—and each moment is shadowed by his bleak history. Shell-shocked and alcoholic, Maclean is divided between a lonely present and a violent past.

Comment: I highly recommend that you read the blurb first. It puts you in the correct time frame, place and mindset. If you don’t read it, prepare to be a little confused for several pages. The blurb is useful in telling readers what to expect, and piques their interest.

First sentence (4/5): He found himself labouring along a narrow, mud road, deeply pitted and rutted by the passage of great columns of men and wagons.

Comment: I like this sentence, and it plops me right down in the middle of the scene.

Spelling, Grammar, POV, text errors (5/10): Imagine yourself struggling through a bleak memory, recalling faces of dead friends as you slog through mud, wondering if you are one of the walking dead or a soldier struggling to get to an unknown destination and…Then the curtain of rain seemed to part, and he beheld, suddenly close up, the thin-lipped, skull-white face, the sunken, always searching, malevolent eyes.

His felt his bowels turning to water with fear. Page 2; Paragraph 3.

SLAP! That’s what that was. A huge slap in the face, bringing me back to reality. I read the sentence three times, thinking I may have missed something…but I didn’t; the editor did. Not two pages later, I came upon another mistake, and I wondered if this book was riddled with them. Thankfully, it wasn’t but that first one, at a pivotal moment as the tension peaked, and I held my breath waiting for the punch, I instead received a slap, tossing me out of the story. If the mistake had occurred elsewhere, in a place where the tension hadn’t built, it could have been easier excused, but there, right at the peak of the tension mountain, it was hard to swallow.

Although we are taught what makes a complete sentence, and as writers, we sometimes break these rules, I find it difficult to see this rule broken on a regular basis in one story. Donaldson often lists things in incomplete sentences, which occasionally confused me. By the time I was halfway through the book, I tended to ignore this, but sometimes, I couldn’t.

Page 3; Paragraph 3: It was also furnished hardly better than a cell. A dresser with a little mirror propped against the wall on top. A small table and two straight-back chairs. A free-standing closet leaning against the wall on the uneven floor, doorless and crudely built out of some trashy wallboard that a man could have put his fist through without even skinning his knuckles. A slack-springed single bed.

Page 84; Paragraph 1: Inside, on a set of shelves beside the washbasin, an arrangement of domestic clutter….and The furnishings of a settled life where a man might lie of an evening in a tub of hot water and read and float away from the troubles outside.

And the odd sentence where duplicate words could have been removed:

Page 85; Paragraph 1: In the morning, he washed and shaved in an upstairs bathroom that faced east and in the morning was always filled with light.

The other thing I’d like to mention here is that until I was halfway through the book, I didn’t know Alice was John’s sister. I thought she was just a girl he went to school with. I don’t know what led me to this impression.

Satisfaction Factor (20/30): When I received this book, I really wanted to enjoy it. War stories about people from Atlantic Canada always interest me. I’ve read several over the years, and each one intrigued me, and I learnt a bit more history, the kind in which involved my father, a Second World War veteran who served in Italy, Belgium and Holland. So when I think of these past stories which satisfied my curiosity and my need to learn more, this story fell short.

I did learn a great deal about John Maclean and his life since returning home from the First World War. I’m sure he’s not the only man who returned, just as lost as if he were still on a smoky battlefield. It’s a shame more couldn’t have been done for them. People who have known individuals like this will have a better understanding of their state after reading this novel.

Engaging story (28/40): The story would have been more engaging without the errors and run-on sentences (which often sent me in circles, looking for the period).

However, there were gems within the hay field:

Page 92; Paragraph 2: Was there lurking somewhere some kind of insane pride, without sense of purpose, that would not let him consent to be the husband of this simple, good woman? Had the wounds he had suffered finally rendered him unfit for active service in the world?

Page 99; Paragraph 7: Once when he was hospital in England before they decided he was no longer healthy enough to be killed, some English ladies, one of the groups that turned up to do something for the boys, took a dozen of them to a great house in the country.

…but there was good times, too,” Ralph said. “Some of the best times of our lives…

There were several characters in this book and I wondered at times who might prove important to the overall story. At first, I tried to remember who they were and their bit of exposed history, but then, as their numbers grew, I forgot about doing that and just read.

For me, the best part was the last scene, when John visited with old friends in a very cosy atmosphere. As he later rambled along the dark, rural road, I recalled the many times when I walked home late at night after visiting with friends or family. I come from a large family, most in rural settings, and gathering in the kitchen for a wee bit of food or drink or card game or chat was a common thing. I miss that, and the author brought it all back. Upon finishing the book, I was left with this warm memory from my own life. 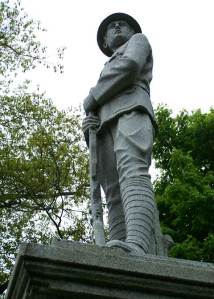 I don’t regret reading this book; overall, it was a good read as it delves into the mind of someone who has done much for our country by participating in the Great War overseas. Growing up with an alcoholic war veteran allowed me to see Maclean like others may not. Although he brought this world to his doorstep, I did feel sorry for him yet I could not offer excuses for his behaviour. He did what he did and life happened to him because of his inability to take control of his addiction.

To learn more on how this review was created, read The Way I Review Books post.