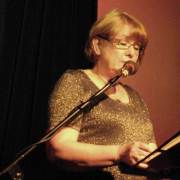 I don’t write with a pen name.

I was born in England and have lived in Canada since 2003.

My favourite genre is humour and I write non-fiction and historical fiction.

I have had two books published.

Which was your first published novel?

I have not published a novel but a non-fiction book, The Magic of Writing Things Down was published in the UK in 2005 to accompany workshops I facilitate where I encourage students to use writing as therapy.

Which is your most current published novel?

My most current published work is actually a memoir entitled A Funny Thing Happened on the Way to Inventing my Childhood.

What’s the working title of the next book you plan to publish?

I read a mixture of paper backs and ebooks.

If you could be a character from a book (not one you’ve written), which would you choose?

I would chose to be Ruby Lennox from Behind the Scenes at the Museum by Kate Atkinson. Despite being part of a dysfunctional family with tragedy in their lives, Ruby neither loses her sense of humour nor her sense of the ridiculous. She soldiers on after attempting to catch, in the best way she can, whatever life throws at her.

What are the first 300 words in your latest novel (ending with a period)?

Here’s the beginning of my novel Falls the Shadow:

Franklin Cohen felt his legs collapse and was glad he was standing by his favourite armchair. He sunk into the comfortable, familiar seat, still clutching the South London Chronicle that Miriam had passed to him minutes ago. He was glad she had left the room for he didn’t want her to see the stricken look on his face.

When she breezed in earlier that morning, he’d been looking at the riot of Spring colour in the garden through the French windows. I wondered lonely as a cloud, he mused. The golden daffodils bowed in his direction as if they were paying homage, as if they were listening to the Wordsworth poem. The red tulips stood erect, immoveable, keeping guard on the plant beds. They were majestic. He never ceased to be amazed at the secrets the cold, dark soil had held all winter. Nature giving its gifts lifted his spirits but only for a brief moment. Now he was in a dark hole like the bulbs had been, struggling to break the surface in order to find the light, in order to breathe but unlike the shoots, he knew he would never blossom. Never come to true fruition. Not now.

‘Guess who’s in the obituaries this week?’ his wife had asked.

He was about to turn from the window when she said, ‘Ellie Bondfield, do you remember her Frank?’

He felt the punch to his solar plexus and grabbed the handle of the French door for support. Winded, he managed to mumble, ‘Mmm.’

‘Honestly, you men are hopeless,’ she said to his back, ‘she was in the Women’s Political Union with me before the First World War.’

‘Oh,’ he managed to whisper and turned away from the window. He picked imaginary fluff from the front of his waistcoat so he wouldn’t have to look her in the eye. He needed to do something to stop his hands from shaking.

Who is your favourite character in this most recent book?

My favourite character is Ellie because she is strong, brave, immoveable in her beliefs, a loyal friend who loves rocking the establishment.

d) Where were they born? London, England

e) What is their favourite colour? Turquoise

f) Are they married? If so, what is their spouse’s name? She is not married

h) Are their parents dead or alive? Her parents are alive although they are separated

i) Who is their best friend? Jeannette Tuffrey, a friend from school who works with Beth.

j) Who is their worst enemy? Her mother’s new boyfriend with his roving hands.

k) What is their favourite flavour of ice cream? Strawberry (it’s the 60s so flavours are limited).

l) What do they fear the most? Being abandoned by her mother now that her grandmother, who has been the stable influence in her life, has died.

Favourite ice cream flavour: do not like ice cream

Biggest dream you hope to accomplish before kicking the bucket: I don’t have a dream (perhaps that means I’m sad!). After a busy life of constantly ‘doing’ am happy to ‘just be’.

Mary was interviewed by CBC Radio One in June 2012. The track can be listened to here.