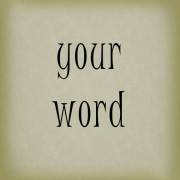 The Prisoner of War who took ‘keeping a promise’ to the extreme post on Steve Liddell’s Musings on a mad world blog is the first thing I read this morning. It intrigued me not only because of my interest in the Great War and the Second World War but because of its story about honour and holding fast to ‘your word’.

Can you imagine a British soldier receiving leave from a German prison camp to visit his dying mother? And then returning because he promised to do so? Well, it happened. Read Liddell’s blog for the whole story.

One of the themes found in my fantasy novel Shadows in the Stone is honour. The other is ‘your word’. In fact, these two words are found in the opening chapter. Readers don’t learn the power of those words until book two in the series Scattered Stones; they discover more about the price the promiser pays if they don’t keep ‘their word’ in book three Healing Stones.

Honour is everything to one of the main characters—Bronwyn Darrow—in Shadows in the Stone. He learns however that sometimes there are things in life more important than this, and he struggles to let his honour slip even the slightest. To him dishonour is worse than death.

Excerpt Shadows in the Stone

Alaura of Niamh bit her lip and twiddled with the small ring on her finger. She glanced around the one-room dwelling and tried to identify the source of a lingering odour which renewed itself when a person moved. Could it be the smell of decomposing food or drying afterbirth?

The dwelling appeared like many in the town of Maskil except this one had no glass windows. Instead, the occupants had boarded-up the openings. The lantern Alaura had lit upon arrival at Maura of Ealasaid’s home provided the only light. It illuminated the bruises on Maura’s calves and wrists. Alaura surveyed the half-naked hauflin; she looked slim for a woman at full term. Maura caught her staring, and she quickly averted her eyes.

Alaura didn’t want to be here, but Catriona Wheatcroft, her teacher, had insisted. She had made an excuse, but Catriona ignored it, saying, I need you. Maura needs you.

Although a stranger in Maskil, Alaura had been accepted as an apprentice by Catriona. Her teacher had told her she’d be capable of great deeds if properly trained in magic. Those deeds included helping others in their time of need. Though Alaura believed a more experienced apprentice made a better choice to assist in the childbirth, she felt compelled to fulfil Catriona’s request.

Maura cried out, making Alaura jump. She watched the pain rip through the small hauflin’s body. Drenched in sweat, Maura clenched her teeth and gripped the frayed blanket beneath her.

“Push, Maura!” Catriona glared at the pregnant woman. “One great push for your baby!”

Alaura watched Maura. She lay on a dilapidated bed, staring at the ceiling. She didn’t want to be here either. Her tattered dress, hiked up past her swollen belly, appeared unfit for washing a floor.

“I can see the head!” Catriona beamed at Alaura. “It won’t be long now. Support her.”

Alaura gripped Maura’s hand and gazed into her face; the worry etched deep lines. “One more,” she whispered. She forced a smile.

Maura clasped her hand and stared into her eyes as if to gather strength for the final push. “You’re like me.” She spoke faintly, but Alaura heard every word. “Hauflin child.”

Alaura gasped. Maura detected her hauflin origins! No one, not even Catriona, suspected her race to be anything other than full-blood human.

Maura held her breath. As if forces of their own making worked upon her body, the baby withdrew from her womb. The final excruciating pain subsided, and Maura fell limp against the mattress.

“It’s alive!” Catriona wrapped the baby in a blanket and gave it to her apprentice.

The infant wriggled in her arms. Its large brown eyes circled the room then swept over Alaura’s face. A toothless grin lit up its dark complexion, making Alaura giggle. She opened the blanket. “It’s a girl.” The woman held the baby for the new meeme to see. “It’s a girl, Maura. A beautiful, healthy girl. Now you have one of each.”

Alaura clamped her mouth shut. No one but the three women and a new baby occupied the room. What triggered Catriona’s uneasiness? The baby kicked the blanket away. “She has strong feet. She’ll be running before long.” Hauflins had thicker skin on the bottom of their feet than humans and walked barefoot easily. Before arriving at Maskil, Alaura lived most of her time without shoes.

“Ignorant hauflins go shoeless in town,” said Catriona. She took a silver necklace from a chest and draped it around the baby’s neck. The cold jewellery on bare skin made the baby purse her lips in surprise. The five blue stones imbedded in the medallion sparkled.

“She’s not meant for happiness.”

Alaura stared at Catriona. Why did she say this? Maura’s horrid condition meant she’d expire soon, but her child had hope for a better life, not misery. She felt a tug on her arm.

“Keep her safe.” Maura’s weak voice trailed off into almost inaudible words. “You’re one of us. A woman. A hauflin. Upon my death, it becomes your duty.”

Catriona hadn’t heard the last few sentences, but Alaura’s hauflin ears caught every word. “I’ll keep her safe. You have my word.”

Alaura caught her breath as the woman’s grip tightened; she hadn’t meant that word. She glanced at Catriona, who was cleaning the birth mess at Maura’s feet.

The sorceress had warned her apprentice not to get personally involved. The baby had been assigned a home. Giving her word meant Alaura would be bonded to Maura’s daughter. The new meeme couldn’t see Catriona’s negative expression, but she’d feel the pain if Alaura obeyed her teacher.

Only eighteen years old, Alaura had problems of her own which forced her to hideout in Maskil. Still, Maura’s eyes begged her to accept the covenant, and the soft smile of the baby cradled in her arms tugged at her maternal instincts. How could she deny a dying woman’s wish for her newborn to be kept safe?

“I give you my word,” said Alaura.

“Your word is your bond.” Maura presented the covenant.

“My word is my bond.” A strange sensation stirred in Alaura’s stomach and moved into her chest. It entered her throat and caused a small burp.

2 thoughts on “Honour and ‘your word’”