G. Kaye wrote a post not long ago regarding Scrivener, the software that is meant to make our writing life easier. Like me, however, many writers have found the program’s large learning curve frustrating and time-consuming.

Some writers love it, wouldn’t write without it, but my brain—and obviously those of many others—don’t function the same way as those lovers of Scrivener. So Scrivener not only looks confusing, but it also becomes illogical to use because other programs work better for us.

Personally, I organise my ideas—including story lines—through memory and patterns. I’m a visual person. I see words in my brain as shapes, and when I see a misspelt word, I recognise it as such because it’s not in its correct shape.

My brain records all things—words, people, places, feelings—in shape form. Yes, you are a blob that floats through my brain, but a blob I recognise easily if your aura has left a marker in my subconscious.

Being a visual person with blob properties, I have to see either the big picture or a large section of it to work efficiently. Scrivener doesn’t allow me to do this easily. It’s like their windows have curtains over them. MS Word allows me to have curtainless windows, giving me a perspective on the entire project while closing off those unnecessary to a particular section of work.

Because here’s the kicker: too much information amounts to clutter. Too many blobs floating around my peripheral vision confuses my brain and reduces my ability to concentrate. That’s the downside of having a wide peripheral view of the world. Narrow glasses drive me nuts because my eyes keep focussing between what I want to look at and the frames. I’m a ‘John Denver, wide-rimmed glasses’ kinda gal.

So while Scrivener may be the cat’s meow for some writers, it doesn’t correlate with my brain. MS Word does, and I can do everything in Word others can do in Scrivener, including rearranging scenes and chapters. Here’s how you do it.

1. Styles: If you don’t know how to use Styles in Word, then you’re missing out on more than rearranging blocks of text with a click and drag. Styles sets the formatting for your words. It’s located on the HOME menu. I won’t go into further details here about the basics of it. I’ve already written a blog post about using Styles, so if you’re unsure of how to use this feature in MS Word, check out Creating a Clean Manuscript. The information about Styles starts about half way into the post.

2. Putting Styles to Use: Once you know how to use Styles, build your story by putting scenes and chapters under easily identified headings. MS Word has four different headings already in place. You can modify them to have the format you feel comfortable with or create new ones.

I find it quick and easy to modify the ones already in place. Instead of the pre-set size, type and colour font, I choose something plain: Bold, black Times New Roman 12 point font. This makes the headings easier to spot in a manuscript but not intrusive. And if I want to print the pages, everything looks tidy in black ink.

Heading 1: This pre-set heading could be used as a chapter heading. Scenes could be designated below Heading 2. Mini scenes could be placed under Heading 3, and paragraphs or blocks of text could be beneath Heading 4.

Here’s a mock-up of what it might look like creating a novel. For the sake of this exercise, I used the pre-set settings on the headings, so they’re easy to identify. Here’s what they stand for:

The diagram shows how the Navigation feature (the window on the left) allows the user to keep track of where everything is in the story, from chapters to paragraphs. It also shows the Style used for each.

TIP: To open the Navigation window, go to the HOME menu and choose FIND on the far right. Choose the first tab in this window to reveal the headings. The other tabs are great for searching the document for a specific page or word.

Headings work well for non-fiction books too. Sections or ideas can have individual headings. Don’t worry about the heading names. They are used only to identify the sections that make up the manuscript. They can be changed or removed at any time.

3. Rearranging Blocks of Text: Now that individual blocks of text are under appropriate headings, the document can be rearranged in seconds. Place the cursor on the heading (in the Navigation window) you wish to move. Click and drag the heading to where you want to put it in the document according to the other headings. A bold line will appear between two other headings when you have it placed right.

The dragging is done within the Navigation window, not the document, so you don’t have to worry about drifting through dozens of pages of text to move a section of writing. If you have dozens of headings, you can close multiple subheadings by clicking the arrow beside the heading.

Here are the results of several moves in just seconds. 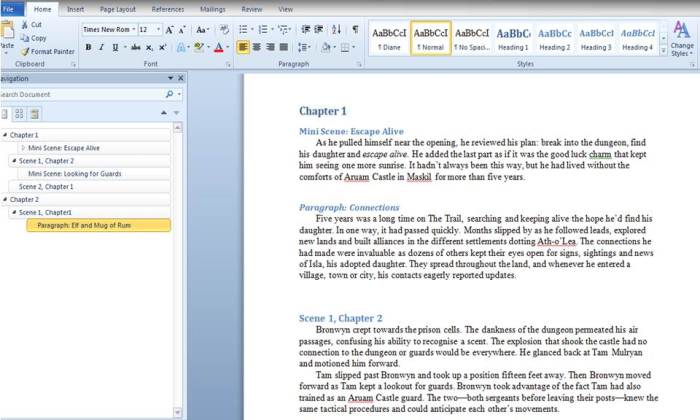 In other words, if I moved Chapter 5, all the scenes, mini scenes and paragraphs below it would move too. The Master Heading keeps all the subheadings together.

Using four headings would be ideal for non-fiction because related blocks of information are usually grouped under similar categories. For the most part, when a block of text gets moved, the writer wants it all to go together. If not, subheadings can be moved individually.

Fiction writing might be better served with only two headings: Heading 1 (Chapters) and Heading 2 (Scenes). This makes rearranging chapters and scenes within chapters or moving a scene to another chapter easier.

As I mentioned above, headings don’t make the final cut. They are there only to serve as identification markers for blocks of text, so create as many as you want and label them with names to help identify them. I remove all headings once I’m happy with the document arrangement.

5. Play: If you’ve never worked Styles and Headings like this before, I suggest creating a ‘fake’ document and playing first before you rearrange a ‘real’ document.

Have you ever worked a document like this before? Did you know you could do this with MS Word?