As I mentioned in my previous blog HalCon History, I attended HalCon for the first time on the weekend. Although the event runs three days, I could attend only one, so I chose Saturday. This is typically their busiest day.

We showed up early (8:30 am) on the advice of my nephew who had attended past HalCon weekends. Since we hadn’t attended on Friday, we had to register and trade our ticket for a bracelet. For anyone going for the first time, this might be a little confusing. I mean, when you attend a concert at the Metro Centre, the attendant at the door scans your ticket and you’re in.

At HalCon, you first have to register, which means show your ticket to the clerk along with a piece of ID, preferably with a picture. She matches up the name on the ticket with your ID, and you get your bracelet. Since the doors didn’t officially open until 9:30, we had to then go in another line, one that would get us officially in.

This line didn’t take long, and shortly after 9:30, we were walking into the vendor area where many things related to fantasy, science fiction and games could be found. It took a few minutes to get our bearings, but eventually the two people I came with, went off to seek the things that interested them, and I went to a presentation I thought was interesting. 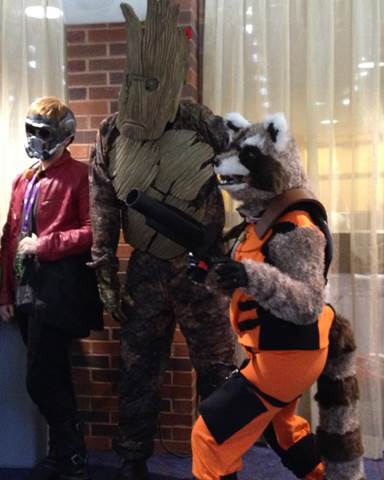 Back on the vendor floor, I walked around, checking out the things for sale and picking up business cards and pamphlets. There were displays by unique groups. One of them was The Society for Creative Anachronism (SCA). It’s “an international living history group with the aim of studying and recreating mainly Medieval European cultures and their histories before the 17th century.”

You can learn more about the individual groups—Cantons of our Barony—in Nova Scotia and Prince Edward Island on the Barony of Ruantallan website. A video on YouTube is available to see how they practise their fighting techniques. Don’t worry ladies; I asked the woman at the display to see if women could participate in the fighting too, and she said definitely. In fact, women often fought in medieval times.

Another interesting group promoting history was The Jules Verne Phantastical Society. It’s a steampunk society for the refined and adventurous, and certainly their costumes screamed this. They were beautiful.

So what is Steampunk? (I had this question too) From the pamphlet: “Science fiction literature hearkening back to the Industrial Revolution, and the art, craft, and aesthetic which comes from that literature. The term was coined in the 1980s by K. W. Jeter, but Steampunk in literature and art began long before the label was created.”

The vendor area was very busy. At times, I had to wait until Captain America moved out of the way to pass. I had to weave around swordsmen, princesses, bounty hunters and Obi-Wan Kenobi to go from one end to the other. At one point, I was halted by the ghostbusters gathered in a circle in the middle of the aisle.

To say the costumes were well done is an understatement. Okay a few could have been better, but for the most part, HalCon attendees take their costumes very seriously. The Darth Vader I met could have easily walked onto a set to star in a film. The Boba Fett I passed several times was just as perfect.

The wonderfully weird thing about walking through and mingling with all these characters is that it felt normal and incredibly familiar. Standing next to Boba Fett, I thought, Hey, I know you.

More than half of those who attended dressed up. And next year, I will too.

The vendor floor also contained several tables with writers of fantasy, science fiction and the strange, as well as illustrators and comic artists.

Once I ventured off the vendor floor, I wandered into the lower floor where the meet and greet of special guests took place. My nephew was in line to meet John de Lancie, and my sister was waiting to meet John Rhys-Davies. Everything was well organised, and if you had a question, a volunteer was nearby to answer it.

The lowest floor in the World Trade and Convention Centre contained the gaming room. Players sat at a few dozen tables with models of worlds for roll-playing games. While talking to a man about creating new games, I looked past him and saw an interesting site that on any other day or in another place might have made me worried. The windows behind him were about six feet off the ground, so if someone walked by outside, you couldn’t see them. So it was quite a site to see the blade of the Grim Reaper’s scythe pass by.

My first experience at HalCon was more than I expected. There’s plenty of things to do and see there, one could easily spend six hours or more hanging out. I will definitely be back next year. Anyone remotely interested in fantasy, science fiction, history, gaming, movies and costumes should definitely check it out.