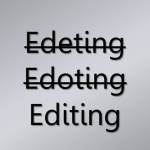 Before I re-publish Mystery Light in Cranberry Cove through CreateSpace, I decided to read through and correct errors I had made in 2010. This book was the first book I self-published.

Initially, I went through Blurb to create paperback copies. They were fairly expensive, and this 31,000-word story geared towards kids between the ages of ten and fourteen cost me almost nine dollars to get to my door. With the US / Canada dollar exchange, it would cost a little more today.

Fast forward to CreateSpace, and now this same book will cost between four and five dollars.

Before I reprint it though, I want to improve the reading experience. After all, I’m a better writer now than I was six years ago. I have learned a lot about storytelling and editing. This novel was also my first experience working with an editor, and perhaps I may have not fully realised what should and shouldn’t have been changed.

For example, in Atlantic Canada kids wear rubbers. Everyone knows what they are. Just because it’s another word for condom in some circles doesn’t make it wrong for me to use in a kid’s story taking place in Nova Scotia. It’s a regional thing, and I like using things unique to where I live. [PS for those who don’t know: Rubbers is short for rubber boots. It’s a word that has been used for decades in Nova Scotia and Newfoundland.]

The bonus of editing the story now is that I haven’t read it for some time. My brain has forgotten what is supposed to be there, making mistakes stand out. And there are mistakes. So I’m glad I’m taking the time to reread and edit.

This story was written before I realised I was a ‘was girl’. There are currently 519 ‘was’ words remaining in the 31,000-word story. I’ve been working to eliminate as many as I can. Here’s an example of how I do that.

Original paragraph: It was a windless, dark night. There was no moon to illuminate the land. The stars twinkled brightly. In the distance, a bluish-white light faintly glowed and slowly moved through the darkness.

Edited to remove ‘was’: The moonless night outside the nylon walls sat still with only twinkling stars separating sky from land and water. In the distance, a bluish-white light faintly glowed, slowly and silently moving through the darkness.

The plural form of ‘was’ is ‘were’. I’m working on reducing the ‘were’ count too.

Original: His light went out. They were cast in darkness. Prim and Ellis continued to row.

Edited to remove ‘were’: His light went out, casting them in darkness. Prim and Ellis continued to row.

The easiest way to reduce the number of ‘was’ and ‘were’ words is to search for them in the document during the author’s editing phase.

Ernesto San Giacomo recently wrote a post about ‘was’ words which reminded me of my original post. You can read his here: To be or not to be: Avoid overusing this verb.

8 thoughts on “Passive Was Words”