It’s been a busy week, one that has had me running in many directions trying to get work done. Thankfully the weather has been fair, so I’m not battling ice and snow as well as a hectic schedule.

I am battling the urge to research explorers to North America. I knew Christopher Columbus didn’t discover a New World–he discovered an Old World–still, I wasn’t aware so many other explorers had made it here before the Vikings settled at L’Anse aux Meadows in 1000 AD.

In Social Studies, my home-schooled son and I are exploring these explorers, and stories ideas are pelting me like hail. I find myself wanting to search for more information on the people who came after the Asians crossed the land bridge into Alaska and…those who came before them. Who were the first humans on North American soil? Ah, we may never know. 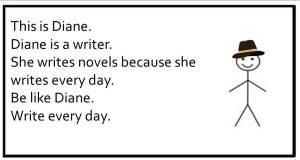 I make a point of reading two to three articles a day on writing, editing and publishing, so I can keep up-to-date and learn new things. This morning I read Business Musings: Bestselling Feet And Other Thoughts by Kristine Kathryn Rusch, and it made me chuckle. The tag “Best Selling” lost its shine with me a long time ago; anyone can be a best-selling author for a day.

The addition to a byline about awards has also become dull, so when I see nominated for several awards, I think, “Yes, but did you win any?”.

To be honest, I think my brain needs a vacation because it’s coming up with all sorts of nonsense, such as the new byline I wrote in response to the ‘best selling’ and ‘award nominations’:

Diane Tibert is a writer who homesteads in Nova Scotia. She’s the daughter of a Bluenoser and a Newfie. She’s written on many topics over the years, including graveyards, hen-scratching, printing stories, playing with manure and dead people. She’s been nominated for many awards and never won anything except a one-year membership to the Writers’ Federation of Nova Scotia (October 2015) and an autographed “Reckless” album by Bryan Adams (1985). Her name has been misspelt as Tibbert, Tilbert and Tolbert.

COMING SOON: Another report on my marketing experience.

The next 300-word Castle Keepers vignette has been posted. It introduces Kellyn Mulryan to readers. Look out for this woman. She’s not like anyone you’ve read in my stories. She’s going to make you angry, shake your head and wonder, “What the heck was Diane thinking?” She is a sharp contrast to Bronwyn Darrow, and as you can imagine, these two butt heads often.