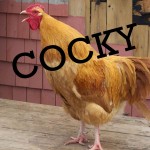 Have you been following cockygate?

What is that, you ask?

First, let me tell you the name of a writer who you have probably never heard of before. It seems this is part of the big mystery: no one knew who this writer was before cockygate became a thing. A copyright thing.

It all started a few days ago when news of an unknown writer getting exclusive rights to use a generic word in a book title hit Twitter. This all sounds very weird, and it’s about to get weirder.

The nobody’s name is Faleena Hopkins. The story begins for this woman on June 16, 2016 when she published the first book in the Cocky romance series. Since then, a few more books were published.

Over the past year or so, she’s claimed other romance writers have used the word ‘cocky’ to copycat her stories because there were so good, famous, long . . . cocky. This led to her claim that other writers used the same stock image as she did to get sales, tricking unsuspecting writers into buying their book instead of hers. 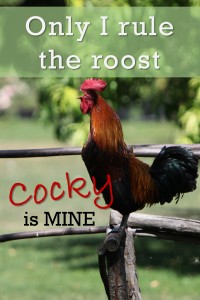 Obviously, her readers aren’t that bright if they can’t read the title and the author’s name and they go by only pictures.

Obviously, this woman isn’t so knowledgeable about photography. She didn’t know she had to buy exclusive rights to photographs or create her own to be original. I’ve seen multiple books with the same stock photos, and I ain’t that bright, but I can read titles and author names to pick the right book I want to buy.

Anyways, this cocky writer Hopkins thinks she should have exclusive rights to the word ‘cocky’ because . . . hold onto your hats . . . she thinks she made the word unique in romance novels.

She has sent letters to other authors who have book titles with the word ‘cocky’ in it, telling them they must change the title, or she’ll be entitled to their royalties.

One of the most famous books out there with this word is Cocky Bastard by Penelope Ward. It was published in August 2015, almost a full year before Hopkins published the first book in the Cocky series.

The Romance Writers of America, along with a growing number of authors, is fighting this. They understand we can’t sit idly by and let one word after another become exclusive to only one writer.

As of yet, they have not hired a lawyer to fight this. They are gathering information. I feel it is only a matter of time before a court battle is had over this. I know I’d be ticked if my book came out before 2016 and was subject to this insane copyright.

I’ve seen comments that stated, “I’m not a romance writer, so I don’t have a dog in this fight.”

I’ve also seen, “I’d never use that word anyways, so I’m not worried.”

As L. M. Brown clearly states on her website:

Why is #cockygate important for ALL writers?

You see where I’m going with this?

This is NOT branding and it impacts ALL writers.

Brown is helping where she can by supporting authors with ‘cocky’ in the title. On this same page, she writes, “As the train wreck that is Faleena Hopkins’ career implosion continues, here are some authors who are involved in this who I am giving a shout out to in support.”

Please spread the word. Let others know. Cocky must not go down without a fight – be that a cock fight or a sword pen fight.

PS: I wanted to emphasize Hopkins was an unknown writer in the business because if she can do it, what is stopping those who dominate the industry: Stephen King, James Patterson, Margaret Atwood?

Links that can tell the story better than I can:

UPDATE (3:20 pm in Nova Scotia): I just read the following and I am wondering if I have ever used the word ‘cocky’ in a review. This is getting insane. It’s as if all material with that word is being removed from Amazon.

Also: If you want to follow this closely, I see a lot of information posted by and commenting to Kevin Kneupper’s Twitter account. He’s a lawyer who is challenging the “cocky” trademark.

UPDATE (Thursday morning): Writer Beware wrote a post that clearly explains the trademark use. It is not for the word in general, only when it is used in a series title. That’s not how authors with ‘cocky’ in the title were treated though.

UPDATE: It’s Thursday May 10, 2018; 2:00 pm in Nova Scotia, and I just read the word ‘rebellion’ has also been claimed. Rest assured, a Cocky Rebellion is well in the making.

DISCLAIMER: All videos, images and advertisements appearing after this post were placed there by WordPress. I do NOT have control over them, and I do NOT endorse any of these companies.