Skip to content
HomeAutomatic Writing or the Genius Named Jack

Twice within 24 hours this week, I was told, “Like automatic writing.” The first time someone said that was how I wrote, I considered it, but didn’t act to learn more about it. I assumed it was another term for those who wrote without using an outline, a writer who could let the creative juices flow and write that story quickly.

When someone else, unrelated to the first conversation said it, I had to look into it further. I’d never heard of automatic writing. Was it something new? Or something old but had recently made the headlines?

But let’s rewind a bit. My discussion previous to this comment was on writing a story and not knowing where that story was going. While I joked about the genius in the wall named Jack, who hung over my shoulder and told the story for me to record it, it’s actually what happens most days. For a few years, I’ve been saying that I’m not actually creating the story; I’m recording events that have already happened in another time and realm. At least that’s how it feels when I write my Castle Keepers epic fantasy series.

In this discussion, I brought up the fact I’d never heard anyone speak of writing like this. That is until a few weeks ago. I had watched a documentary discussing J. R. R. Tolkien, author of Lord of the Rings, and the presenter revealed: “He had this strong experience that it (the story) was given to him. That he was recording something that was happening. Therefore, the story was all important.”

When I elaborated on the genius in the wall, I spoke about always knowing I wasn’t alone when I wrote, that discussions were had with ‘someone’ to decide on the final version. I didn’t know it was a genius until a few years ago when I watched author of Eat, Pray, Love Elizabeth Gilbert’s TED talk, Your Elusive Creative Genius. This conversation revealed Jack’s identity to me. I had already known his purpose.

Being in the zone and allowing Jack to tell the story made me write quickly, and many times in the past ten years, when I later read what I’d written, I didn’t remember writing it. 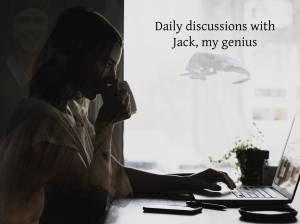 This, my writing friends told me, is referred to as automatic writing.

Googling automatic writing, I found it could be done while in a trance, possibly while channeling a spirit to write the material for the person. Some attribute it to a supernatural occurrence. In some cases, the writer closed their eyes and wrote with a pen on paper. While I can type with my eyes closed, my handwriting using this method would be very messy.

After looking into this more, I’m unsure if I’d call what I do automatic writing. Perhaps it is to some but I’m not sold on the idea. Personally, I feel it’s more like a collaboration most days; it’s not with a spirit, of sorts, but something different, of which I cannot describe. I prefer my genius living in my walls, being part of me in some way, being only mine and not shared with anyone else. Perhaps because I spend time daily with my genius, he is loyal to me, so is there whenever I feel the urge to write.

Either way, I hope he sticks around forever. It’s a friendship I value and never want to be without.

4 thoughts on “Automatic Writing or the Genius Named Jack”