I can’t get over how busy the past four months have been for me. While I have been writing a little, editing a lot and formatting books, an equal amount of time (if not more) has been spent offline, away from the computer.

Life is going in the direction I had planned, so I’m far from complaining. However, I am rethinking a few things I had planned.

For instance, I wrote two short novels last year, both under 70,000 words. They were not fantasy and because of advice from other writers and Amazon’s algorithms, I had decided to publish these and others of similar fashion under a new pen name. Of course, a new pen name would create a few challenges of its own, but I was prepared to tackle them. 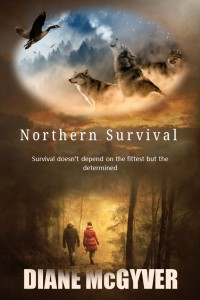 Then life got busy and the advice of others and Amazon seemed less important. If I’m going to live like this for a few years, I need to make my writing career simpler, not more complex.

After much thought, my next project, Northern Survival, will be under the pen name I use for all my adult fiction, except I’m going to leave out the middle name. It will simply be Diane McGyver.

This decided, I’ll be able to talk about this survival, adventure, romance book on my regular blogs. But for now, I’m here – after a day of work in a greenhouse – to tell you about my recent release: Healing Stones, the 4th book in the Castle Keepers series. I’m going to go out on a limb and say this is my favourite book in the series, and I think it’s the best written.

If you’re interested, the eBook is on sale at Amazon for 99 cents until May 20th. You’ll find it here:

If you haven’t started the series yet, the first book, Shadows in the Stone, is FREE at several places. You’ll find it here:

I won’t have time for much online activity until August, but I’ll be back occasionally.