Skip to content
HomeSometimes You Really Can’t Go Back

This was supposed to be a review of Sword of Shannara by Terry Brooks, but I can’t do it. Back in the mid-80s, reading this novel as an impressionable young teen who loved the fantasy world and wanted to be a writer, I devoured it. Loved it. But times change. Minds grow, develop and adapt to their surroundings. What had enthralled me then, doesn’t today. Let me explain.

Wanting to relive that feeling I initially felt, when I saw the July 12, 1983 Mass Market version of The Sword of Shannara at a yard sale for 50 cents, I snatched it up. My hardcopy had been out of sight and mind for almost 17 years, when my youngest moved into my office and my office was packed away in boxes and stored in various closets.

Easy on the Eyes 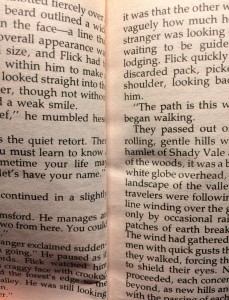 The mass market copy is NOT easy on the eyes or the hands. The text is small, and the gutter is so narrow, I was forced to open the book wider than necessary to read the lines. The publishing company presenting a popular book in this format is a disgrace. I know, it was all about saving money, but Brooks made them a lot of money with this book and many more. [Click photo to the right to see details]

This wasn’t the worst presented book I’ve tried to read. Ernest Buckler’s The Mountain and the Valley was. The presentation was elementary, meaning a grade two student could have designed it better. There was no gutter or outside margin – small text went right to the edge of the page. It was ugly. I struggled with bending and twisting the book as I read – it was a book you needed two hands to read. Within 100 pages, after multiple descriptions of the same thing page after page, and no adventure in the mountain or the valley – the reason why I thought I’d love to read it; because I thought it was an outdoor adventure story – I returned it to the library without further thought. If the book had been easier on the eyes and the hands, I might have continued further…or I may not have. I’ll never know.

The Sword of Shannara is a good story. I remember enjoying it. Thousands, maybe millions, of other readers have also enjoyed it over the decades. It’s why the Amazon page can make this claim: the classic series that has become one of the most popular fantasy tales of all time.

The large number of 5-star reviews echo that sentiment. As a reader of fantasy novels, I’d probably still love the way it was written – if I hadn’t become a more competent writer than I was in my teens.

Why I Can’t Finish It

While the story is good, the style of Brooks’ writing doesn’t appeal to me. Anymore. It reminds me of my first stories, written in the same fashion, the same ones I’ve spent years repairing to be cleaner, less cluttered with unnecessary words and details, and less repetitiveness.

If I edited out the unnecessary thats and other words, and removed the instances where something was said a second or third (or fourth) time, The Sword of Shannara would easily be reduced by 1/3. Why hadn’t the editor working with Brooks done this? Was word count more important than just telling the story?

PS: A few of the one-star reviews for this book echoed this sentiment: that there was a lot of repetitiveness.

Brooks was heavy on description and while some readers don’t like that, I don’t mind it so much even if my books have only the description necessary to carry the story.

While Brooks wrote about his fantasy world, I’m sure he used the real world as a template. One paragraph made me pause and think about today’s world, and I think this description of Men (mankind) in Brooks’ fantasy world rings more true of mankind today than in the 80s.

Men today have forgotten the past; they know little of the present and less of the future. The race of Man lives almost solely in the confines of Southland. It knows nothing at all of the Northland and its peoples, and little of the Eastland and Westland. A pity that Men have developed into such a shortsighted people, for once they were the most visionary of the races. But now they are quite content to live apart from the other races, isolated from the problems of the rest of the world. They remain content, mind you, because those problems have not as yet touched them and because a fear of the past has persuaded them not to look too closely at the future.” [The Sword of Shannara ~ Terry Brooks: Chapter 2; page 23]

I managed to read up to page 208 of the 726-page book before I grew disinterested. Perhaps in the future, when I find much time on my hands, I will dig out the hardcover version and pick up where I left off. Or I might leave it to memory, a story I enjoyed. It would be worse to learn if the story, not only the writing style, didn’t live up to my memory.

6 thoughts on “Sometimes You Really Can’t Go Back”