Today I’m at the Writing Wicket as Diane Lynn McGyver, my alternate ego who writes fantasy novels. Catherine MacKenzie interviews writers every Wednesday on her blog, so if you’re interested, drop her a line.

You can check out my interview here: Writer Wednesdays – Diane Lynn McGyver.

Also, since it’s my birthday, I made all my Castle Keepers Tale short stories free for the day. These short stories tie in with my fantasy novels, Shadows in the Stone and Scattered Stones.

stars in Destiny Governed their Lives

stars in Blade of Truth 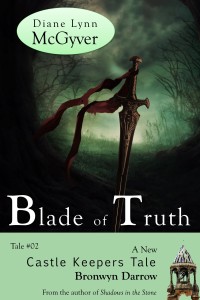 stars in The Pledge

The novel is available at many fine retailers including your local books and online at Chapters/Indigo and Amazon.

1) What inspired you to write Flying with a Broken Wing?

When I’m writing a story, a line will often come to me right out of the blue. It was the case with Flying with a Broken Wing. Years ago, my mother and I had a conversation about reincarnation. She made the comment that, as a child, she always wondered what her next life would be like. Her words stayed with me, and years later sparked the idea for the first sentence of the book. “From as far back as I can remember I’d lie in bed at night and wonder what my next life would be like.” Although I immediately knew the character wasn’t speaking about reincarnation, I was interested in knowing why a young girl would even be thinking about a brand new life. What was so terribly wrong with the one she had?

I was also inspired to create a character that is visually impaired since my mother is visually impaired.  I wasn’t sure there were many books out there with a visually impaired protagonist, so I decided to create one. It was important to me. Many years ago I wanted to write my mother’s story, but I soon discovered that creating fiction from fact is not as easy as it sounds. I eventually gave up the idea. But once that first sentence came to me, the character of Cammie quickly emerged all on her own. As I continued to write I began to learn the details of her life; not only was she visually impaired, but she’d been abandoned at birth and was being raised by her bootlegging aunt. It was easy then to imagine why she’d want a brand new life.

END_OF_DOCUMENT_TOKEN_TO_BE_REPLACED

A short while ago I received an email from Smashwords announcing Author Interviews. I didn’t have time then to investigate, so I put it off until tonight. Now I have an interview ‘published’ at the eBook distribution site to allow readers to discover a little more about me.

If you are published on Smashwords, you too can post an interview and share a little about yourself to your readers. All you have to do is visit the Manage Interview page to read the instructions and then clicked the link to Proceed to Your Interview.

The next screen is self-explanatory. All you need to do is answer the question or choose another question. When you’re done, click preview, read it for mistakes then click PUBLISH.

END_OF_DOCUMENT_TOKEN_TO_BE_REPLACED

Today I’m proud to introduce the first book by a new writer. June J. Austin is the author of Sing Her Home. I had the pleasure of interviewing June and asking her about her novel and the three-day eBook promotion that starts today.

Diane Tibert: What inspired you to write Sing Her Home?

June J. Austin: Sing Her Home started off as a question for me, I had asked myself one day-What would life be like if I was in a coma? Would I be aware of my surroundings even if I couldn’t open my eyes and communicate with others? Of course I went on to wonder if others had reported being aware of their surroundings while in a coma.

Diane Tibert: How did you come up with the title Sing Her Home?

June J. Austin: The title comes directly from the book. I will share that excerpt:

END_OF_DOCUMENT_TOKEN_TO_BE_REPLACED

After five months of author interviews, I’ve decided to switch things up a bit and host The Five Questions Interview. It a quick, to the point interview with authors who’ve recently released a new book.

1) What is the title of your recent book? Is it a series, what genre is it and is it suitable for all ages?

The title of my most recent book is Concealed From Sight. It is a murder mystery book and is mainly aimed at an adult audience. Women will enjoy this book. There is not an abundance of swearing in it, but I’ve tried to make the people real. Outside of the language, maybe 30 words out of 94,000, it is suitable for anyone. It is a series to the degree that the two main policemen, Detective-Sergeant Jim Mcdonald and Corporal Scott Bowen, show up in all three of my published novels and in two of the ones I’m currently working on.

END_OF_DOCUMENT_TOKEN_TO_BE_REPLACED

I do not write with a pen name, although sometimes I wish I did!

I was born in Canada and still live there.

I write romance books, although I would love to create a new section in the bookstore, I would call it “Horror-Mance” because my romance stories contain elements of horror. As well, I am planning to write a true-crime novel in the near future.

I have published one novel to date.

END_OF_DOCUMENT_TOKEN_TO_BE_REPLACED

I was born in England and now live in my ancestral Scotland.

I started with short stories, then wrote my first novel, then started writing poetry and never looked back. I think of myself as someone who writes in all literary genres – with the exception of drama, but who knows for the future? – but I am probably best-known as a poet.

How many books have you had published?

I have published one collection of poetry in 2010 called Naked in the Sea, and a novel in 2012 entitled Lupa.

END_OF_DOCUMENT_TOKEN_TO_BE_REPLACED

Diane Tibert
Create a free website or blog at WordPress.com.