There are many events going on around the province this weekend so if you live in Nova Scotia, you have plenty to keep you busy. Here are just three events I’m either involved in or wish I was involved in.

Craft Show: First up is the In Hants Craft Show at the Milford Recreation Hall, Milford Station, East Hants. The show hosts the creative works of more than sixty local crafters. You’ll find everything from quilts to cookies, from fancy hats to wooden carvings. You shop as if you’re in a gift shop, then pay for your purchase all at once at the check-out using cash, Visa or MasterCard.

This is the second year I’ve participated in the show. Last year I sold books and homemade goat milk soap. Only my books are there this year.

END_OF_DOCUMENT_TOKEN_TO_BE_REPLACED 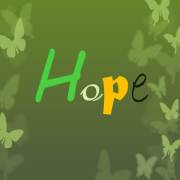 It came to me this morning. All of a sudden like. It was something I wanted to remember, something I needed to remember because it was equally important to me as to the few customers who talked about it.

And in retail, we all know if one customer is thinking it and asking about it, there are ten more thinking about it and not asking about it. It’s the same thing in the classroom: if one student asks a question, you can bet there are three others who have the same question but for some reason don’t ask.

So here it is. I was asked this question by three or four readers at the Middle Musquodoboit craft show that took place in November 2013: Do you have any stories that are uplifting, that are positive?

The women made this comment while looking at my short story collection, Nova Scotia – Life Near Water. On the surface, the stories sounded very dark:

The Man Who Reads Obituaries: A man is lying in a hospital bed, waiting to die of cancer. To pass his final hours, he plays a game he calls Heaven or Hell.

Dancing in the Shine: A woman is trying to escape an abusive relationship. She feels trapped and doesn’t know where to turn. She is isolated from friends and family. Her parents died during Hurricane Juan. She is lost and feels hopeless.

Mutated Bloodlines: The floodwaters have made Nova Scotia an island. The main character lives alone and her brother wants her to move to ‘the mainland’ for her safety, but he has evil plans for her.

END_OF_DOCUMENT_TOKEN_TO_BE_REPLACED 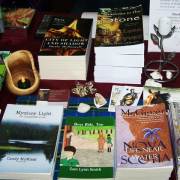 Last weekend Jayne Peters, Mindy George and I attended the Christmas Festival of Crafts at Middle Musquodoboit. This was my first official book-selling event, and the first craft show in which I was a seller not a buyer.

I planned ahead, trying to think of everything I’d need to create an attractive display and to make transactions go smoothly. Well, after a few hours, I had a list of things to keep in mind for future craft shows and selling events, as well as book selling in general.

Here is a list of things to remember for next time:

1) Bags: We forgot to bring them. When I got home the first day I looked around the house and found a few small Christmas gift bags that would easily accommodate my novels. They were perfect for a Christmas craft show but would not due for any other time of year. So I need to look into getting either blank plastic bags (I don’t want to advertise a grocery or a large box store) or plain paper bags for non-Christmasy events.

2) Genre Tags: Not everyone asks about the genre of a book, but I can see they’re interested in knowing where a book fits into the scheme of things, so little tags that state Fantasy, Romance or Mystery will help. Children’s picture books are obvious and don’t need genre tags.

END_OF_DOCUMENT_TOKEN_TO_BE_REPLACED

The Christmas Festival of Crafts Show in Middle Musquodoboit was very busy today. It was shoulder to shoulder walking between the displays. Dozens and dozens of people stopped at our stand, looked at our books, discussed the books, picked up flyers and business cards and many bought books. In total we sold 30!

Here we are all set up at the start of the day. 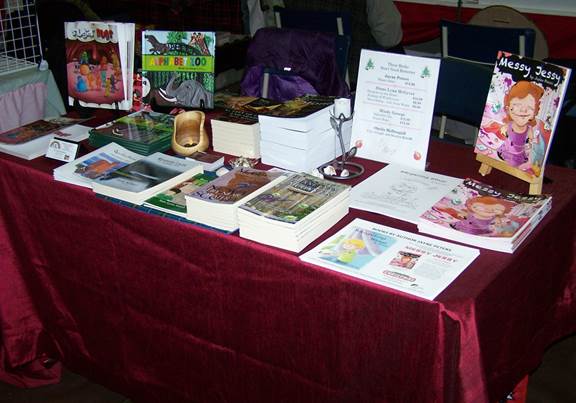 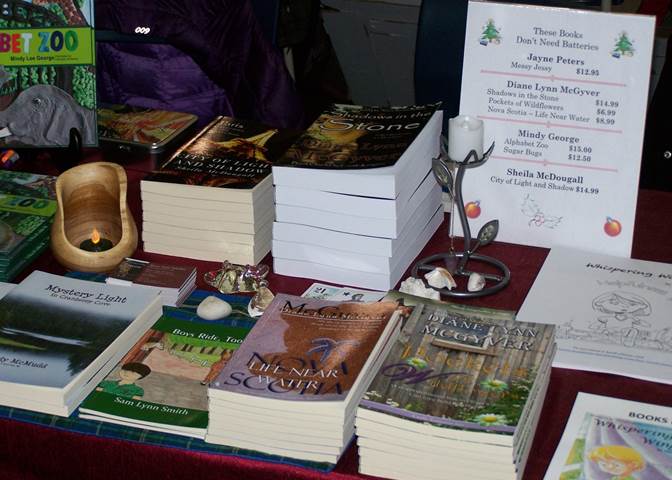 Later on this morning I’ll be at the Middle Musquodoboit Craft Show. The show runs from 10 to 4 today and 11 to 4 tomorrow. Jayne Peters and Mindy George will also be there selling books.

Here is a stack I arranged yesterday for a photograph. 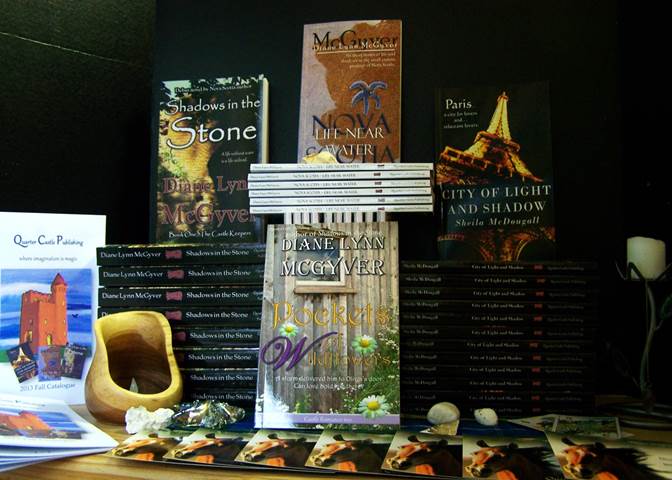 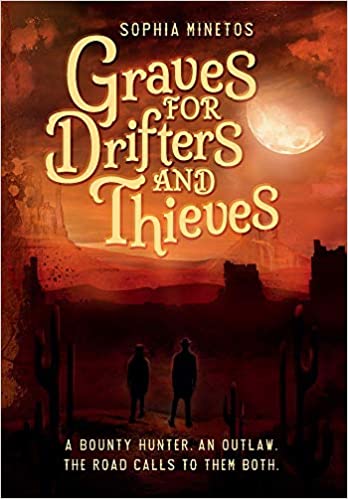